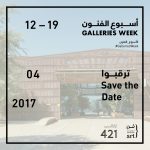 Warehouse421 in partnership with Abu Dhabi Art invites new art collectors to the opening of Galleries Week, which will be held at Warehouse421 in Abu Dhabi between 12-19 April. The inaugural event will showcase six galleries, presenting a wide variety of artworks at a range of price points. With prices beginning at AED 2,000, Galleries Week offers first-time art buyers entry into the world of collecting.

Dedicated to enabling galleries to connect with Abu Dhabi residents during the year, the week-long event will feature local and regional galleries: Salwa Zeidan from Abu Dhabi; Cuadro Fine Arts Gallery and ElMarsa from Dubai; and ATHR and Hafez Gallery from Jeddah, alongside GALLERIA CONTINUA from Italy, France, China and Cuba. The participating galleries will showcase works by emerging artists, offering an opportunity for residents to discover and buy art and engage with the cultural scene in Abu Dhabi through a programme of talks, performances, workshops and film screenings. 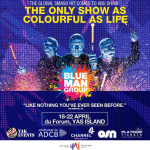 Award-winning global phenomenon Blue Man Group has set its eye on Abu Dhabi, as they makes the capital part of its new World Tour for the first time ever. The acclaimed stage show, best known and recognised for its trio of dynamic and distinctive blue men performers, will be coming to Yas Island’s du Forum from April 18 to 22, 2017.

Since the group’s inception it has grown to include permanent shows in Las Vegas, New York, Orlando, Boston, Chicago and Berlin, as well as a North American Tour and a World Tour.

Shakespeare under the Stars: Macbeth 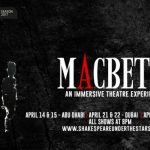 Murder and treachery in the corporate boardroom.

Constellation Productions pulls together an all-female cast in this modern retelling of Shakespeare’s Macbeth. And there is nothing normal about it. Do not expect to be seated facing a stage. This is a promenade and immersive production: moving from scene-to-scene, finding random corners of action and corridors of madness.

Preserving the Shakespearean English, but set in present-day UAE, you will have the chance to experience Shakespeare in a whole new way. Elements of Arabic (and many other languages) appear in this insanity-filled performance.

Student discount of 25% with Student ID

With hundreds of developments from Abu Dhabi and overseas being showcased, Cityscape Abu Dhabi 2017 is the home of real estate investment for the residential, retail, hospitality and commercial sectors.